Below is a review sent in by an attendee of Solomun at Pacha in the summer season of 2015.

The Solomun logo is a down pointed crucifix, showing not rejection of but blatant hatred for Jesus and Christianity, something Freemasonry brain washing achieves in the cult members. 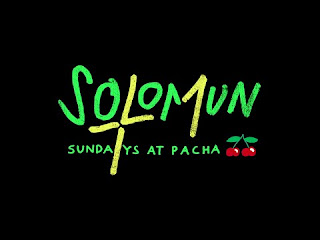 First of all, I want to thank you and your collaborators for your effort in creating this blog which I just found a few hours ago because of my concerns with mass manipulation in Ibiza.

Last night, I went to Solomun Party in Pacha and my suspicions that mass manipulation exists in Ibiza was confirmed. And i am glad I am not the only one that draws this conclusion, i have found your blog today after the party because i wanted to find more on this subject.

There were 5 things that drew my attention last night, of course there are more that I didn't observe consciously:
1. A lot of upside down pyramids in the club and one double pyramid with led triangles on it.
The next four things happened aproximately between 6-7 am:
2. A strange female voice on the background of solomun and dixon beats, that was talking or better said promoting with a cunning tone the drug ecstasy;
3. A weird voice talking about a 40 000 year old secret about humanity;
4. A loop of several minutes with a violent voice saying: "Get back, sorrow!";
5. A malefic laugh repeated.

After these there was very chill, relaxed, positive music that gave you a positive feeling until the end of the party close to 8am.

When I first came to Ibiza, last year from July to September I was amazed about the number of strange graffiti paintings in San Antonio (I lived there), especially the one close to a roundabout with a robot observing humans in small jars, but there are a lot, I don't understand how they get authorization to paint these things.

Also, there is a madness with drugs, that are as normal as candy here on the island. The creature on the fences of ushuaia beach club, which resembles some oriental god with a big erection and 6 fingers at its hand.

Furthermore, the music was very strange and crazy for me, because it was my first strong contact with edm music and also the big screens seemed to display strange pictures and people around me in the club were in a trance like state.

So I draw my conclusion that all of these resemble a propitious place for mind control and manipulation because I was familiar from back home with concepts like illuminati and was sure that they influence mainstream music.

I wasn't sure of the manipulation but I knew that it is a perfect place for this so I was sure that I wasn't the only one that drew this conclusion, so the people in power surely knew this thing before me.

But this year with the party from last night was the cherry on the cake, (nice coincidence with the cherries in the pacha logo) because everything was very overt and out in the open for me, even though my friends didn't notice or care about these issues.

That's why I searched online today for "subliminal messages in ibiza" and found your blog, also I found out that there is a masonic lodge on the island: http://www.ibizalodge44.com/ .

I am glad I found your blog and I am not the only "lunatic" seeing these things!
Posted by Anonymous Ibiza at 18:42

Email ThisBlogThis!Share to TwitterShare to FacebookShare to Pinterest
Labels: Solomun