The Colors of Darkness VJ Mix by Speedy

This video was produced by The Red Man film producer.

WARNING!!!! This video is as sick as they come.

How far removed it is from what most people would believe electronic dance music started off as? This just goes to show how infested it is with evil minded people's agendas. Unfortunately, unless you can actually see the musicians making the music you allow your ears to hear, you do not know what is being funnelled into your head. I would therefore advise turning off the volume and just watching the video. Music such as this will no doubt contain inaudible sound that can have a detrimental effect on you.

Worryingly, the video has twelve upvotes and only one downvote and the only two comments are 'Love it' and 'Wonderful'. There are a lot of seriously sick people in this world but would we recognise them in the street? These people get pleasure from the suffering of others. This pleasure is called 'dark ecstasy'. Most people get their euphoric moments from joyous things such as beautiful scenery, happy events, etc. but 'dark' people get their satisfaction from dark things, such as this video. If this video is a good representation of reality, that would mean people deeply involved in the occult and Freemasonry gets their kicks from human torture. Is that why you can hear, for example, people screaming in Adam Beyer mixes?

This video demonstrates Freemasonry torture and murder inside a Masonic lodge. 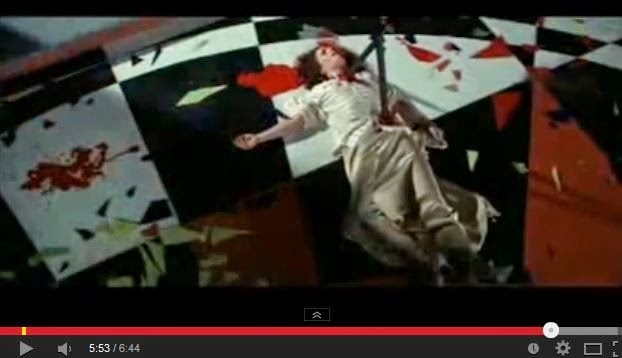 Lying on a black and white Masonic floor impaled by a Masonic compass.

This music video was made by Jimmie Gonzalez, otherwise known as Speedy. He is finishing making a film called The Red Man.

John Acquaviva – The iconic DJ and entrepreneur, has partnered with Las Vegas DJ and filmmaker Jimmie Gonzalez to executive produce his original screenplay. The official “Concept Trailer” features music by French DJ/producer Olivier Giacomotto who will also be onboard to score the full feature film, “The Red Man” . With Kubrickesque style, Polanski occult paranoia and 70’s Italian Giallo violence, the blend of hypnotic visuals and relentless techno music can only be mixed by like minded DJ’s – such as the team assembled here.

For this project my music is not based on notes but on very precise frequencies. For example i will use a certain frequency all along the movie, 19 hertz, which is in the range known as infrasound, below the range of human hearing. You can’t hear it but you’ll surely feel it, as low frequencies in this region can affect humans in several ways, causing discomfort, dizziness, blurred vision (by vibrating your eyeballs), hyperventilation, fear, and even terror or panic attacks. So i decided that the whole soundtrack of The Red Man will be based on this specific frequency in order to disturb the audience.

The Red Man is a psychological thriller, i try to produce a sound that will emphasize strong feelings and dark emotions expressed in the movie, such anxiety, fear, terror, dizziness, etc…

One thing the occult likes to do is reveal what it does to the masses. I believe this is exactly what this film is intending on doing. Rosemary's Baby did the same thing....made by occultists exposing what they do. The world and the internet are littered with occultism; it is in plain sight, but most people won't see it because humans do not generally notice very much.

Here are some comments made by Jimmy Gonzalez on his Twitter account, the profile photo of which is a triangle shape.

Amy Winehouse and 27 Club http://shar.es/AQ7Oi  #theredmanfilm
That confirms what we at AI suspected.
Thank you @realAdamBeyer...Vegas needed it... You gave it!

Here is the Facebook page for the film The Red Man.

A comment 'Next stop, EDM' links to this article about the Illuminati at the Grammies. So confident they are almost cocky.

But to look at the photos in the Facebook page you would think these people were perfectly normal. That is the scariest thing.

Posted by Anonymous Ibiza at 10:19