This post will contain images of Hard Rock Cafe and Hard Rock Hotel, some of which will be in Ibiza.

We're making this post because we feel the Hard Rock establishments are occult/Illuminati/Masonic. This is our personal opinion, which we are free to express in this dying free world. We're making the most of the freedom we have left and we'd rather go out with a bang than a fizzle.

Please make up your own mind on this post, the statements of which must not be taken as fact.

The Hard Rock Cafe pin above is of a pyramid, which suggests Freemasonry Theosophy, which is obsessed with ancient Egypt. The pyramidal structure also reflects the top down power and wisdom structure of the Illuminati with the masses at the bottom being kept both ignorant of the secret ancient mysteries and also powerless. The pyramid reflects the many steps to full enlightenment within Freemasonry.

Here we once again see a pyramid but it also has a defined Ben Ben stone with an all-seeing eye. The all-seeing eye represents the all-seeing eye of Lucifer, the god of Theosophical Freemasonry, plus the ever watchful eye of Big Brother in the surveillance society we will soon be living in as slaves to the occult New World Order. Sun worship, which is indicative of the Illuminati.

This photo shows a pyramid.

The top part represents the Ben Ben stone and also the upper echelons of the Freemasonry Illuminati power structure. The top is very well illuminated, which is because it reflects the illumination of acquired ancient wisdom of the higher up Masons and individuals within the various Illuminati secret societies and global elite. This ancient wisdom, we believe, consists of knowledge of how the mind works...knowledge we are only now starting to understand. These 'illumed ones' have always believed it is black magic but now we know it is just science. Science withheld from the wider world because it is powerful knowledge that could be dangerous in the wrong hands. Unfortunately it is right now in the wrong hands and we know this because the global elite wish to get rid of us unwashed masses and have the world all to themselves. They have told us that in the Georgia Guidestones global population pledge....no more than 500m. That's a 90% reduction. The Guidestones could have been engraved by the Nazis given their eugenics plan. Not exactly 'Ibiza' is it? 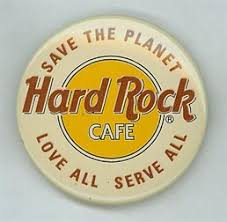 Hard Rock Cafe with an inane mantra so similar to a Swedish House Mafia mantra.

These mantras have nothing to do with love, peace, ecology, etc.

They are to do with cleansing the world of the riff-raff....you...and preserving it for the elites. Anarchy, rebellion, revolution, fight against the system, etc. These are Illuminati tactics designed to create chaos because where there is chaos there is a possibility of offering up a solution. 'Order out of chaos'. New World Order out of chaos.

The barcode is indicative of a New World Order agenda and is seen frequently in EDM. See this. We are seen as cattle to be tagged and controlled. Bathrooms don't get much more Illuminati than this. 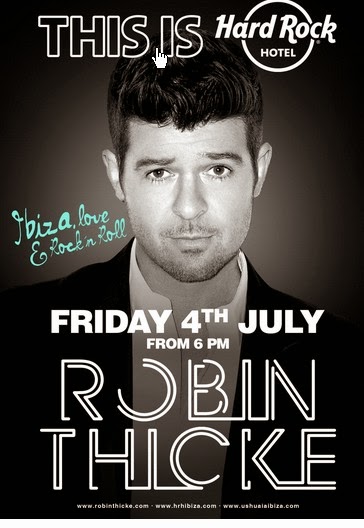 The image of the sheep with its multiple reflections reflects MK Ultra mind control in which people are subjected to traumatic psychological abuse in order to fracture their personalities into many separate components, each with a different role and each unaware of the others. 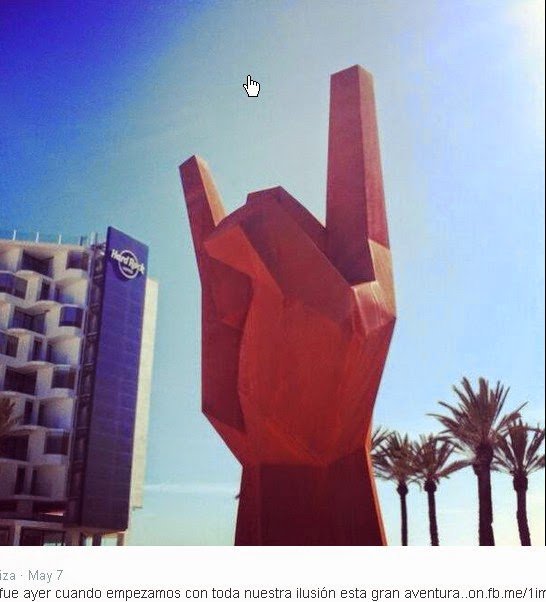 The devil hand sign sculpture outside the new Hard Rock Hotel in Ibiza. 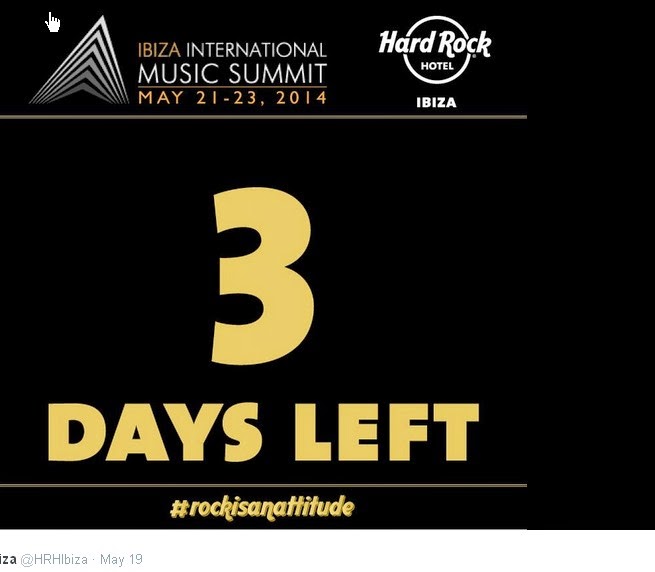 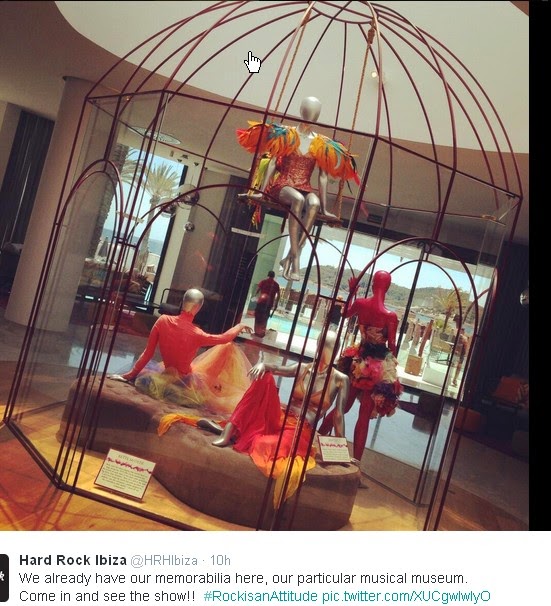 Hard Rock Hotel Ibiza
.
This 'museum of music' displayed at Hard Rock Hotel in Ibiza is extremely disturbing as it contains celebrities who are suspected to have been subjected to MK Ultra mind control. The birdcage is representative of their lifelong imprisonment. What a sick almost macabre display? Please read this article, which not only talks about women in cages but also women in ropes (as seen at Pacha) and mirror mind control (as seen in Guy Gerber of Wisdom of the Glove). 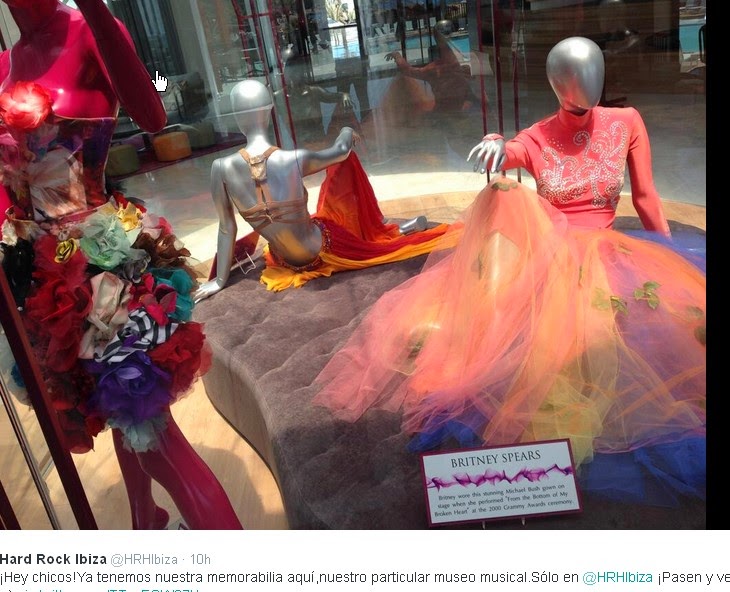 Here is Britney Spears inside the birdcage. Britney Spears is widely believed to be an Illuminati puppet having been subjected to trauma based psychological programming from being a child at the Mickey Mouse Club.

An Illuminati hotel would not be complete without the ubiquitous RFID chip.

Stick out your arm lady and get that barcode.

The Illuminati is drip feeding us their transhumanist agenda, which will lead us all into a New World Order in which we are all chipped, all controlled, all watched by Big Brother and all under threat of being disconnected should we be problematic.

So, Hard Rock Hotel or House of Horrors?

Look at these shocking Tripadvisor reviews...here. But the weirdest thing is that the replies to the complaints end in cult-like mantras....'Save the planet', 'Take time to be kind' and 'All is one'. How weird is that? Imagine being told to take time to be kind by the people who ruined your holiday! Twisted or what? These mantras are exactly like you'd expect from big name EDM, such as Swedish House Mafia's mantra 'Save the world'. The future is not only bleak but bloody odd if we don't start to take a stand against this cult. Imagine a world in which you are told to be nice by people who have not been nice to you. These odd mantras will be forced on us soon via loudspeakers....'Be nice', 'We are one', 'Don't eat too much', 'Babies create methaine, don't have any', 'Have sex', 'Change your vibrations'. Here we shall post information on Isaac Tigrett, the 'Illuminist' founder of Hard Rock Cafe & Hotel and a complete fruitcake he is and who seems to resemble many of the New Age goons in Ibiza.

In 1991, rumors of a box being welded to the apex of the pyramid floated around until someone investigated and sure enough, a welded box with a crystal skull was found. Isaac Tigrett, son of John, said he put it there as a publicity stunt to be employed later on. Never mind that Isaac followed the teachings of Sathya Sri Baba; a famous Indian mystical guru. Sri Baba would later be investigated for money laundering and child sexual abuse, all par for the course in this Illuminati ring.

Of course, this wonderful and peaceful world will not include the unwashed masses.

'THE UNAVOIDABLE CORRECT STEPPING STONE TO CREATE A RENAISSANCE IN OUR CIVILIZATION. IT WILL NOT BE THE FIRST DYNAMIC RECONSTRUCTION IN OUR HISTORY.'

The 'unavoidable correct stepping stone' and the 'dynamic reconstruction' is the genocide of us.

Here are some videos of Isaac Tigrett's 'prophet' Sai Baba, otherwise known as the 'Criminal Swami'...


Like attracts like so this does not bode well for Isaac Tigrett, Hard Rock Hotel or the global elites. But then we should know that the New Occult World Order will involve pedophilia because we already know they are programming our little girls to be little bisexual Lolitas.


In the BBC documentary The Secret Swami, Tigrett stated that he believed that there was truth to the rumors of Sai Baba's actions of pedophilia and sexual abuse towards some of his young male followers. He also stated that such behavior would not change his belief in Sai Baba.

Yuck! So the founder of Hard Rock Cafe knew his 'prophet' was a pedophile but was not bothered about it???

Read this shocking testinmony of an ex-worker of Hard Rock Cafe in Sweden.

That says it all.....they spew out the mantras but they treat the people like shit whilst feathering their nests and the whole thing is organised in a hierarchical power structure just like the Freemasons. This is the future folks and worse if we don't act now.

What do Michael Jackson, Madonna, Britney Spears, and Anna Nicole have in common? All of these celebrity's shoes are displayed at the Hard Rock Cafe where Anna Nicole died. Read more here.

All opinions are our own so there.

Posted by Anonymous Ibiza at 17:36